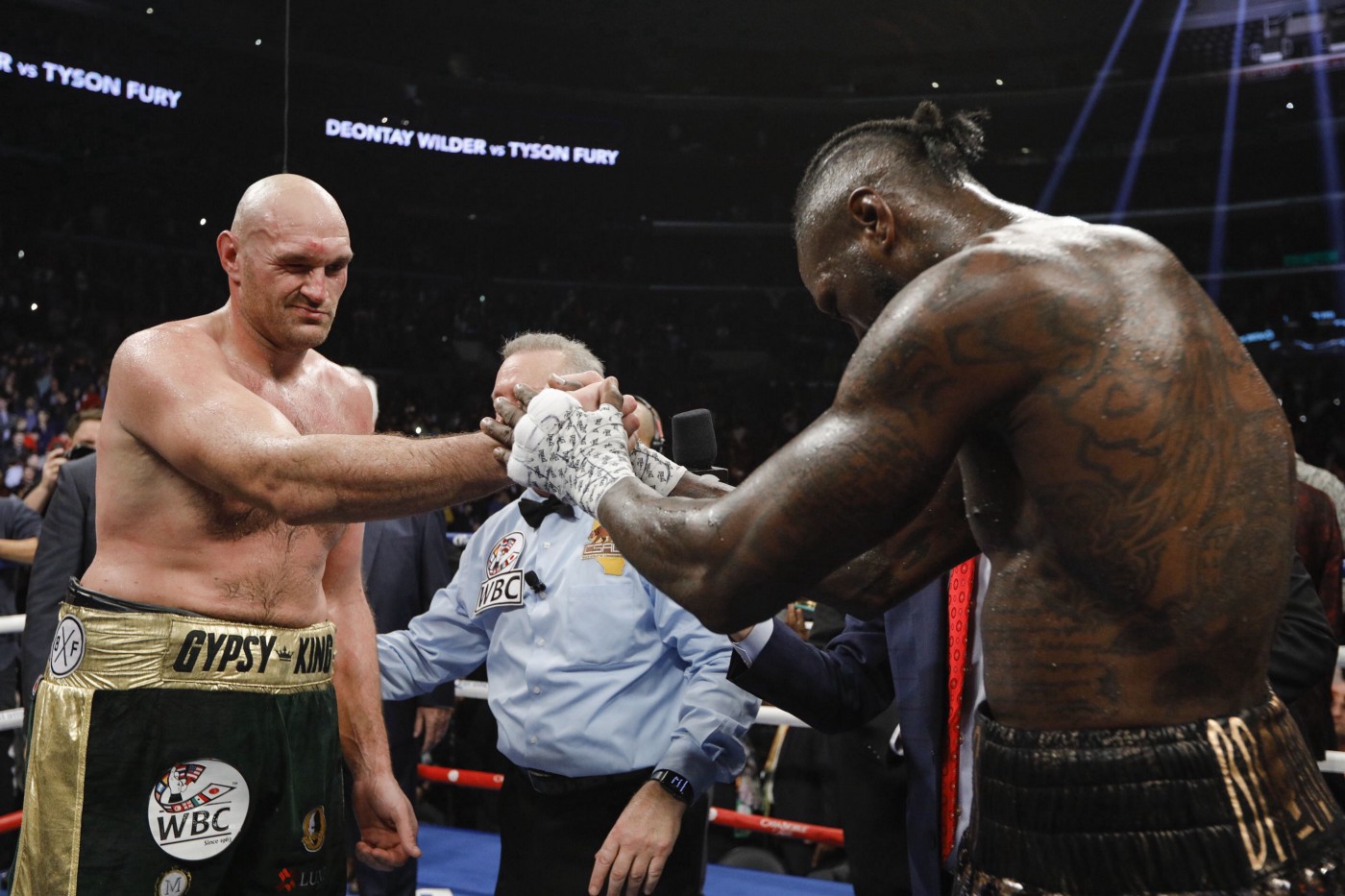 By Babajide Sotande-Peters on Friday, February 21, 2020

April 2017 – “That is how you win a heavyweight championship!”

Wilder’s first taste of the big time would not be in the ring, but instead in the commentary booth, for the biggest heavyweight contest of that year. Wilder watched in amazement as budding superstar Anthony Joshua scored an epic TKO victory over Wladimir Klitschko in front of 90,000 at Wembley. In doing so, Joshua formed a new consensus as to who the man to beat in the division was. Where one man crumbled under the weight of expectation and fame, this fighter took everything in stride. Joshua and Wilder greeted each other with a fist bump, however Tyson Fury was the guy on the new unified champion’s mind.

And where was Fury? Plodding along trying to lose fat from his now 400lb frame. No license, no belts and, with the PED situation still unresolved, no future in the sport.

Determined to finally make his mark after two and a half largely unfulfilling years as a belt-holder, Wilder sought out dangerous Cuban southpaw Luis Ortiz as his next voluntary defence. Finally, the sort of challenge arose for Wilder once again to prove himself, but once again drug testing would get in the way. Ortiz getting busted a week and a half away from fight night was definitely not in the script.

All was definitely not lost for Wilder, he was able to take out his frustrations on the only man to last the distance with him prior.

Rendering Bermane Stiverne into a permanent internet meme created the sort of buzz which had gone amiss for the preceding few years. Wilder set his sights firmly on Joshua (fresh off another stoppage victory) and was unwilling to acquiesce towards calls to prove himself further. Meanwhile another Brit, with the help of expensive lawyers, settled his longstanding anti-doping issue and began to slowly piece together an unlikely return to the ring..

In the space of a few spring months in 2018, the paradigm shift in the heavyweight division turned unexpectedly. Luis Ortiz had resurfaced, allowing Wilder to “bless him with an opportunity” and give himself the chance to add a marquee name to his ledger in fight number forty of his career.

If the Stiverne fight sparked some buzz, the Ortiz fight added kerosene to those small flames. A back and forth battle in Brooklyn allowed Wilder to demonstrate the skill and will of a world level fighter, as he rallied to stop his man late after nearly being finished himself. In a fight that played out in an eerily reminiscent way to Joshua-Klitschko.

The Bronze Bomber had real momentum now and so did a potential showdown with Anthony Joshua. The latter picked up another title belt in an effective but rather listless performance versus WBO champion Joseph Parker. Not easy on the eye but one that raised intrigue and questions over how he would fare versus Wilder. Watching from home, Wilder certainly was less than impressed and made his feelings clear.

He wasn’t the only one who reacted similarly. About to announce his return to the ring with a new team and broadcaster, Tyson Fury seemingly had returned to his vintage bombastic self.

The summer of 2018 in some way belonged to Tyson Fury. Enamoured by his comeback story from rock bottom as they have been towards many in the past, the British public were all keenly awaiting his June return. Said return came and went and before people could question the horrific choice of performance, how out of shape Fury was or the merits of the novice trainer he had employed, another tune up was scheduled for the middle of August on a Carl Frampton undercard in Belfast.

It was accepted that it would take a while before we saw Fury in title contention, especially when the coast had been cleared for an undisputed title showdown between Wilder and Joshua. But, when months dragged on with boardroom insults, network changes and rejected offers came and went without a deal, both men opted to go in different directions.

Wilder wanted to be on the big stage. He wanted the star making event which underpins every man’s road to glory. With Joshua off the table, he knew that there was one man who served to be the perfect dance partner at the right time for him to fulfil said desires. So the WBC champ, with entourage alongside, boarded once again to a stadium across the pond. This time – Windsor Park in Belfast was the destination and he was there to set the wheels in motions for a December showdown vs Tyson Fury. With Fury emerging unscathed from his second tune up, the matchup both foresaw years ago was finally materialising after a whirlwind first half of 2018.

December 2018 – Once Upon A Time in Hollywood

Shortly after the Belfast encounter, the financials were sorted and the date and venue were set in stone. December 1st at the Staples Center in Los Angeles. The preceding press tour was a predictable comical shambles as you get with two men who respect each other pretending otherwise. Fury proceeded with preparations against the orders of close family members, Wilder only had a knockout on his mind. Fury embraced the occasion, Wilder let it consume him. But with the doubts surrounding Fury’s fitness, it was only a matter of time until that right hand landed once that first bell went… right?

It eventually did. In the ninth, after several rounds mixed with tension and Fury’s slickness. A temple shot from Wilder didn’t full register, but the right hand left hook which he planted on the blubbering frame of Fury in the 12th was heard around the world. Fury somehow mustered the strength to rise and beat the count and finish the fight on top. Some thought Wilder had it, the majority thought Fury had completed a fairytale comeback. Everybody was left wholly unfulfilled when referee Jack Reiss raised both men’s hands to signal a draw verdict. The journey that these two men had gone on was far from over.

It looked for a while that an immediate rematch between Wilder and Fury was inevitable for the spring, however an oil rich boxing marketplace had other ideas.

On the advice of management, Fury was steered to a new promoter and new network. Bob Arum knows a thing or two about managing the commercial affairs of heavyweights. A swift negotiation and Fury defected over to Top Rank and plans of a Wilder rematch were halted instantly.

Wilder, perhaps with more to gain from an immediate rematch, wasn’t best pleased. However as the months progressed, the stars would soon begin to align in his favour.

With Fury planning to take two tune up fights yet again, media and fan attention once again turned towards a potential Wilder vs Joshua undisputed showdown. Wilder was the only promotional or network free agent left out of the top three heavyweights and a bidding war emerged for his services – most notably from DAZN, who laid out a proposal with the supposed intention of making that undisputed showdown. Nonetheless, it was felt from both himself and his team that free agency suited Wilder best and he leveraged the several offers he did have on the table and ended up making a killing to slice through sworn enemy Dominic Breazeale in a few minutes in Mid-May.

But what was just as significant as adding another kayo to the highlight reel was the best laid plans Wilder put in place shortly after. He would sign to rematch the man who had him on the brink the preceding March and, provided he emerged victorious from that affair, there was a gentleman’s agreement for him and the Gypsy King to finally rematch the following spring.

The day after announcing these plans to the world, Wilder watched on with shock as Anthony Joshua was topped by short notice replacement Andy Ruiz Jr in seven rounds at Madison Square Garden. Joshua would admirably reclaim his belts by the years end, but he was unable to budge the consensus that there were now only two men with claims to being king of the big men.

Fury made short work of Tom Schwarz in Las Vegas a few weeks after Joshua was slain – meaning that we were one fight from each away from having the fight to determine numero uno. Surely nothing could go wrong from here?

As 2019 drew to a close, we got the official confirmation that both Wilder and Fury would meet as planned on the 22nd February in Las Vegas. But to say that the final stretch to reach that point was routine would certainly not be truthful.

Tyson Fury met Swedish prospect Otto Wallin in Las Vegas in September in what was supposed to be a good workout and a few more rounds in the bank before the big one. A left hand to the face and a grotesque cut later and we got a dog fight befitting of the “Guerrero” persona Fury had adopted for Mexican Independence Day weekend. Fury got the decision, but had there not been multi-millions riding on his future, he’d have been pulled out sharpish by a referee or a ringside doctor. Unable to train or spar for months, Fury instead took himself away to another domain and dabbled in the theatrics – the sports entertainment theatrics to be specific. A WWE stint in earnest began the promotion for the planned big one.

Deontay Wilder found himself being shutout for the first half of the fight by a better conditioned and determined Luis Ortiz. Round seven was more of the same. Wilder leads, Ortiz counters to head and body, we begin to fear the worst, Ortiz steps a little into the pocket, Wilder searches for range with his jab, Ortiz bring his front foot forward and… good night Ortiz.

A right cross delivered effortlessly by Wilder and the coast was clear. Title defence number 10 in the books paving the way for a chance to fully eradicate all doubt about his legitimacy as a heavyweight champion.

In experiencing the tribulations they did in the autumn, both Tyson Fury and Deontay Wilder raised the intrigue level for their second showdown. Is Fury either handicapped or battle worn or will Wilder be unable to overcome his limitations once again?